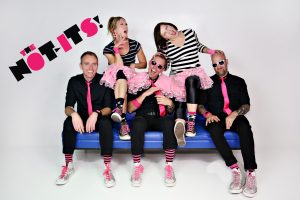 For more than seven years now, The Not-Its! have rocked kids and families with their up-tempo albums and live concerts that give children their first “rock show” experience. With the release of their sixth album, Are You Listening?, this Seattle “Kindie Rock” quintet will have children and their parents on their feet, screaming for more, from the moment they hit the dance floor!

They are Sarah Shannon (former singer of 90’s Sub Pop band Velocity Girl), Danny Adamson (rhythm guitar), Tom Baisden (lead guitar), Jennie Helman (bass player) and Michael Welke (former drummer of Harvey Danger). As parents, they add 10 children to the crowd, ranging in ages 5-13. Since 2008 they have been poised to keep their families and yours dancing along at their live shows as well as to their recorded albums, and with their much anticipated sixth album, Are You Listening?, it is clear they have no intention of slowing down!

Are You Listening? kicks off with the high jumping “Dance With Me,” a song that was written the day before going into the studio, but quickly took form with its anthemic potential. Several of the other 9 original songs are inspired by daily family life, belying the hard-driving beats. Parents will nod in recognition and tap their weary feet when they hear “Done With The Science Fair” and “Traffic Jam.” The rousing “Washington, D.C.,” features the title refrain, “Are you listening?”, which becomes a two-way street between young citizens and their representatives in government. The humorously reassuring song “Don’t Fear The Dentist,” could have been ripped from the latest Sleater Kinney project.