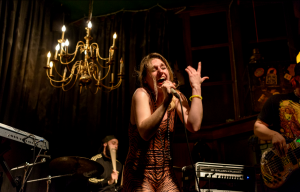 Though the four grew up about ten minutes from each other, Ehssan and Katelyn crossed paths for the first time on the other side of the country while attending Berklee College of Music in Boston.  They quickly became accustomed to playing shows and recording music together at home during summer vacations!

In the summer of 2010 Katelyn put together a full-length album of her original songs.  For Kate it was never question of who she wanted on bass and drums.  Martin and Ehssan were the rhythm section on that project.  Moving out of that summer Ehssan had another year at Berklee yet.  Martin and Katelyn decided to followthrough on that album by creating the band Fortune Dwellers.  Ehssan recommended Elliot to them, and them to Elliot.  There was no turning back!  Ehssan returned the following summer and took his place as the drummer for Fortune Dwellers.  Fortune Dwellers also included a killer horn section!  Katelyn Berreth was the sole songwriter for that band.  After a few years, Fortun Dwellers disbanded.

After a few more years, Kate had a birthday and all she wanted was to play her songs with her favorites: Ehssan Karimi, Martin Celt, and Elliot Gray.  As miracle would have it, everybody was available and game!  Getting back into the room together was so fun and so easy.  It made the four wonder why they weren’t making music together more… That birthday show was the catalyst to Good Quiver the band.

​From track 1 Good Quiver has written every song together from the ground up as a band.  The process is incredibly rewarding: To be a part of such a greater whole.  THIS is what Musical Chemistry and Everlasting Friendship SOUNDS like.  Thanks for listening!