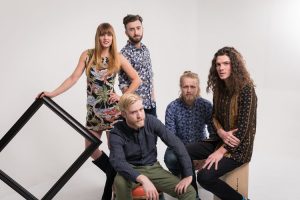 Resurgence isn’t a term to take lightly, particularly in music; it takes more than one band to bring back an entire sound. The application for a psychedelic pop “resurgence”, though, has been developing a more convincing case file with acts like The Flaming Lips, Tame Impala, and Animal Collective fronting a renaissance of familiar soundscapes that recall the tradition of long haired frontmen making fuzzy yet catchy rock sounds.

Starting as a cast of friends playing in Seattle’s DIY scene, Dune Butler used the forming of a psych rock band as the start to the sound he was dreaming to accomplish after spending time with the folk / country act BLVD Park. After recruiting guitarist David Salonen, drummer Sam Veatch and finally keyboardist Eric Vanderbilt-Mathews into the fold, they set out as General Mojo’s Key Project. Their first show was in the basement of 5010 house, and in their first instrumental track “Free Sound Paradox”, they laid out what their sound was going to be: simultaneous waves of psychedelic and melodic, bouncy and heavy, down-home and interstellar.

General Mojo’s created an even more locked down groove with the addition of Heather Thomas, who provides non-traditional accompaniment as a vocal lead with percussion and floor tom positioned front and center of the stage. On top of the latest tour, the band just released their third record, which promises to be the most mature iteration of their sound yet.

Despite their light hearted stage presence and style, GM provides a serious sound, collecting the hook-laden melodies and complex lucid solo sections reminiscent of Yes, Emerson Lake & Palmer, or something like Temples. It’s exciting to see: General Mojo’s plays both the loose and groovy rock you remember and a buttoned down psychedelic sound you’ve never experienced before!